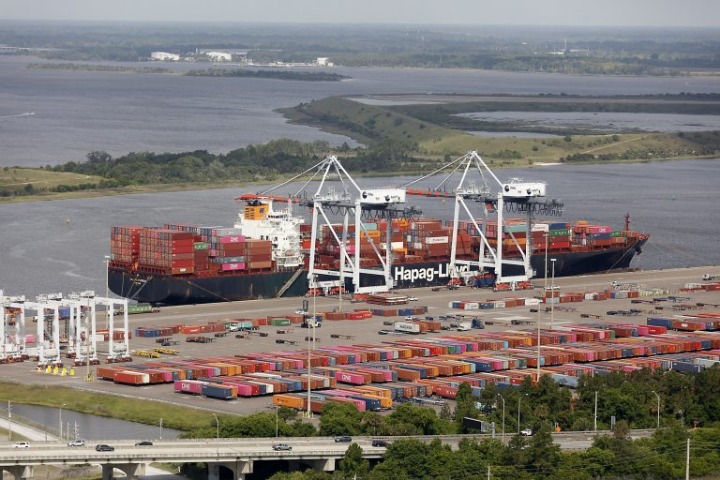 The service, which connects Europe to the US, will begin calling at JAXPORT’s TraPac Container Terminal with the arrival of the Hudson Express in mid-November.

The re-route is part of an effort to optimise Hapag-Lloyd’s service portfolio, while also stabilising schedules and adapting to market needs. JAXPORT chosen for this as it currently has no container vessels waiting at anchorage and offers two-way river traffic to transit to and from berths.

The updated port rotation follows the route of Antwerp (Belgium) – Hamburg (Germany) – London (UK) – Charleston (US) – Jacksonville (US) – Norfolk (US).

“During this time of unprecedented port disruption, Jacksonville’s efficiencies on both the landside and waterside continue to make us stand out in the industry,” said Eric Green, CEO of JAXPORT.

“With our strategic location – and the efficiencies of our labour, terminal operators, facilities and transportation network – there’s no question Jacksonville is an extremely attractive option for ocean carriers and shippers looking to take advantage of the ease of doing business Jacksonville offers.”

The service will last for eight weeks and will bring an estimated 1,000 additional TEU a week through JAXPORT.

Major infrastructure investments are underway at JAXPORT to prepare for this continued growth. This can be seen as the port authority awarded Superior Construction a $48.8 million construction contract to improve its container handling abilities at its SSA Jacksonville Container Terminal.

Announced in September 2021, the project will enable the SSA facility to handle around 500,00 TEU annually, an increase of 150% compared to its current throughput. Completion of the project is expected in 2024.